Nicole Horseherder speaks out about the dirty coal-fired power plant on Navajoland, which provides electricity primarily to Phoenix and Tucson while poisoning Navajos 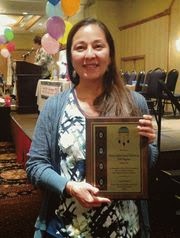 By Nicole Horseherder
Indigenous Resistance
President Obama and his Environmental Protection Agency are pushing to clean up the oldest and dirtiest coal-fired power plants in our nation.
Unfortunately, for Dine (Navajo) people this will be a long road. Navajo Generating Station, the nation's only coal plant where the U.S. government is an operator, would have been a good place to start.
Instead, the people of the Navajo Nation will be left breathing poisons and pollution for another three decades.
Located on the northwestern side of the Navajo Nation's 27,000 square miles, near Page, NGS is the largest coal-fired power plant on the Colorado Plateau and one of the 10 biggest polluters in the country. Now, after years of delay, rather than holding the federal owners to the requirements of the Clean Air Act, EPA Administrator Gina McCarthy caved.


In a July 28 editorial, this newspaper lauded McCarthy's decision for striking a balance "between cleaner air and economic good sense." But compromising the health and cultural integrity of people whose homeland surrounds the power plant for the sake of coal jobs and cheap power to pump Colorado River water is not a just balance.
My people still eat the sheep and cattle they raise, as well as the corn and squash they grow. Our animals and crops are directly impacted by the pollution emitted from this 40-year-old generating station. My people are not only breathing in the pollution but also ingesting the toxins that fall upon the vegetation, crops and animals.
EPA was supposed to clean up NGS' emissions within five years. McCarthy should have required the federal operator, the U.S. Bureau of Reclamation, to cut smog-forming nitrogen oxide spewing from the stacks by 85 percent by 2020.
Those improvements would have ended generations of disproportionate health impacts to my people from the plant's pollution and cleared up hazy vistas in Grand Canyon National Park. Ending the U.S. government's interests in this dirty coal plant would have also spurred needed investment in renewable energy on tribal lands and kept water flowing to ever-thirsty metropolitan areas, benefiting Arizonans and my community.
Instead, because NGS is located on an Indian reservation, EPA watered down the Clean Air Act requirements and adopted a plan to let the power plant keep polluting until 2044, continuing a legacy of asthma and bronchitis and choking haze.
Fifty years ago, the Department of Interior, promising jobs and a steady flow of income, persuaded the Navajo Nation and the Hopi to waive substantial water rights and allow NGS' construction. Some of those jobs remain. But most of the revenue has flowed out along with the electricity, while soot, smog, mercury and toxic coal-combustion waste remain.
The White House and EPA should have started their dirty-power plant cleanup with the dirty-fuel energy systems they directly control. Instead, they decided to make families living in the shadow of these smokestacks wait the longest for clean air and a healthful environment.
Nicole Horseherder is the co-founder of To Nizhone Ani ("Beautiful Spring Speaks"), an indigenous environmental group working to protect the Navajo environmental heritage.
This article first appeared in Arizona Republic and is published at Indigenous Resistance with permission from Nicole Horseherder.
Posted by Censored News, publisher Brenda Norrell at 12:29 PM