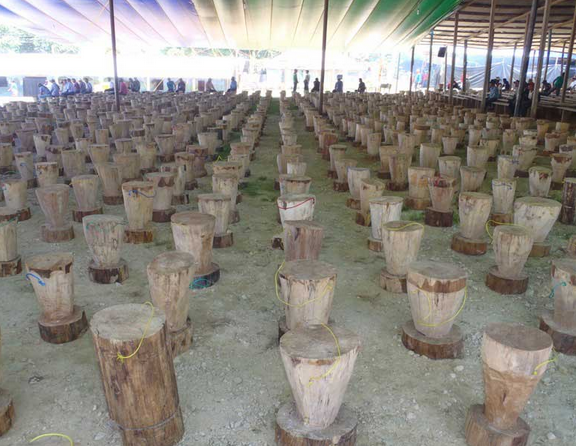 To the Sixth in Mexico and in the world:
To the free, autonomous, alternative, or however-you-call-it media:
Compas:
Zapatista greetings.
FIRST. I am writing to let you know that the participants of the National Indigenous Congress have arrived safely to this First Exchange of the Zapatista Peoples and the Indigenous Peoples of Mexico “Compañero David Ruiz García.” The compañeras andcompañeros bases of support who will be sharing their history of struggle have also arrived.
Here I want to share some information with you:
1. From the National Indigenous Congress as well as other indigenous social groups, peoples, tribes, and nations of Mexico, 312 participants have arrived from the following groups:
NAHUA
PURÉPECHA
MAYA PENINSULAR
MAZAHUA
ZOQUE
WIXARIKA
MIGRANTE
TEPEHUANO
COCA
HÑAHÑU
PAME
TRIQUI
MIXTECO
BINNI ZAA
CHINANTECO
IKOOT
AFROMEXICANO
POPOLUCA
TZOTZIL
CHOL
TOJOLABAL
TZELTAL
TOTONACO
KUMIAI
AMUZGO
MESTIZO
HUARIJÍO
MIXE
ÑHATO
CHONTAL
2. On behalf of the Zapatista communities, we have the participation of:
-50 presenters (male and female)
-50 scribes (male and female)
-1200 listeners from the Zapatista communities
In total: 1300 Zapatista bases of support.
All have arrived safely. I am letting you know so that you can inform others where you live and that way the families of those who have come from far away do not worry.
SECOND. As proposed by the compañeras and compañeros of the National Indigenous Congress, the closing event of this first exchange, on Saturday August 9, 2014, will be open to the press in general.
THIRD. The compañeras and compañeros of the National and International Sixth are special invitees to the closing event.
FOURTH. The compañeras and compañeros of the free, autonomous, alternative, or however-you-call-it media are special invitees to the closing event.
FIFTH. The compañeras and compañeros of the National and International Sixth are welcome to arrive as of Friday August 8, 2014, and their departure is at their own convenience.
We ask the free, autonomous, alternative, or however-you-call-it media to see about staying one extra day after the closing event so that we can hold that cursed press conference that we’ve been promising you, and which we couldn’t hold last time because we saw that you needed to leave quickly because the paid media were stealing the material you produced at the Homage for our deceased compañeroGaleano. Indeed that is how capitalism works, stealing what others produce. So let’s see if you can organize things so that you can report on the closing event and then later we will do the press conference.
And SupGaleano tells me to inform the free, autonomous, alternative, or however-you-call-it media to come prepared because we are going to interview you. He says we are going to include a section in our magazine REBELDÍA ZAPATISTA called “The ducks shoot at the rifles,” where we will print the interviews we do with you. SupGaleano says that you will understand why the section has that title.
Finally, the last thing for today, I am sending you some photos that SupGaleano took of the set-up that has been prepared here. We’ll see if they send because the internet here is really slow, it’s like a snail with a limp. He says the title of the photos is “The Zapatista Alternative to the International Monetary Fund and the Usurious Banks: The Zapatista Mobile Bank.”[i] If the photos don’t go through, you can see the Zapatista Mobile Bank when you come.
You will also be able to see how the reconstruction is coming along for the clinic and the school that were destroyed by the CIOAC-Histórica paramilitaries.
It would be good for you to take photos, video, or whatever of the construction so that the good people who supported this just cause can see in the free, autonomous, alternative, or however-you-call-it media that we are honoring our word, not like the bad governments who keep everything for themselves while they say they are making social improvements. Pure thievery is what they do.
Well that’s all for now, compañeras and compañeros of the National and International Sixth. Tomorrow, Monday, after the inauguration, the work of the exchange will begin. We will send you the inaugural speech that compañero Comandante Tacho will give in the name of all of the Zapatistas.
That’s all.
From the mountains of the Mexican Southeast.
Subcomandante Insurgente Moisés.
Mexico, August 2, 2014. In the twentieth year of the war against oblivion.
[i] The photo shows a large covered area with many rows of small, carved wooden stools referred to in Spanish as “bancos,” which also happens to be the Spanish word for bank.
Posted by Censored News, publisher Brenda Norrell at 5:34 AM