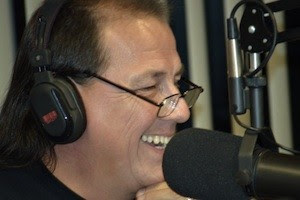 First Voices Indigenous Radio was the first Indigenous radio program in the northeastern U.S., has been airing on WBAI for 11 years. With more than 1 million online hits annually, the program has become known for bringing to the airwaves the experiences, perspectives and struggles of Indigenous peoples worldwide whose exclusion from mainstream, progressive and alternative media is deleterious to the whole of humanity.

The show's Host is John Kane, Mohawk. Founding Host and Executive Producer is Tiokasin Ghosthorse, Lakota. Past shows are available at www.firstvoicesindigenousradio.org.
FVIR has been re-broadcasted on 45 stations in 15 states in the the U.S. and one Canadian province, including: Colorado, Connecticut, Idaho, Illinois, Iowa, Maine, Massachusetts, Minnesota, New Hampshire, New York, Northwest Territories, Oregon, Pennsylvania, Tennessee, Vermont, and Washington.
John Karhiio Kane is a national commentator on Native issues. He hosts two weekly radio shows,  "Let's Talk Native...with John Kane," on ESPN Sports Radio WWKB-AM 1520 in Buffalo, New York and “First Voices Indigenous Radio” on WBAI-FM 99.5 in New York City.
Kane appears frequently on TV and radio and is a columnist for “The Two Row Times.” His columns are regularly posted in “Censored News” and the Native Nations Institute’s Indigenous Governance Database at the University of Arizona. John publishes the Native Pride blog, has a page on the ESPN website  (http://www.espn1520.com/pages/17325417.php) and a very active "Let's Talk Native...with John Kane" Facebook group page.
John was honored earlier this year with a Community Leader Media Award from the National Federation for Just Communities of Western New York. He is a member of the Native American Journalists Association (NAJA).
Photocredit: Stephanie Kane
Posted by Censored News, publisher Brenda Norrell at 9:23 AM